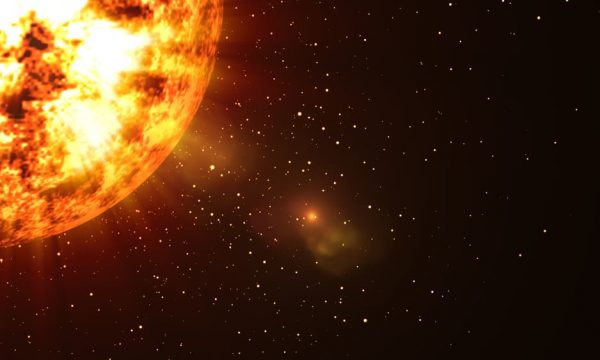 How Hot is The Sun? The Sun's Temperature Explained

But drawing back to that ever-important aspect of warmth, how exactly does the Sun produce heat? And just how hot is it?

How does the Sun produce heat?

To know this we have to take a close look at the very centre of the Sun, at its core there is so much pressure and so much heat that nuclear fusion takes place which releases a humongous amount of energy every single second.

This process causes a chain reaction that allows hydrogen to be converted into energy and for this energy to build up continuously, a current never-ending cycle of light and heat is produced. Considering the heat this star gives off, its core only ranges up to around 25% of the solar radius, as beyond 30% the reaction has almost completely stopped.

The rest of the Sun is heated via the energy being transferred from the core and out into its layers, once it reaches the photosphere this is when said energy propagates into space. But granted this is only a cycle that will continue to keep happening whilst there are hydrogen atoms present, but more on that later. 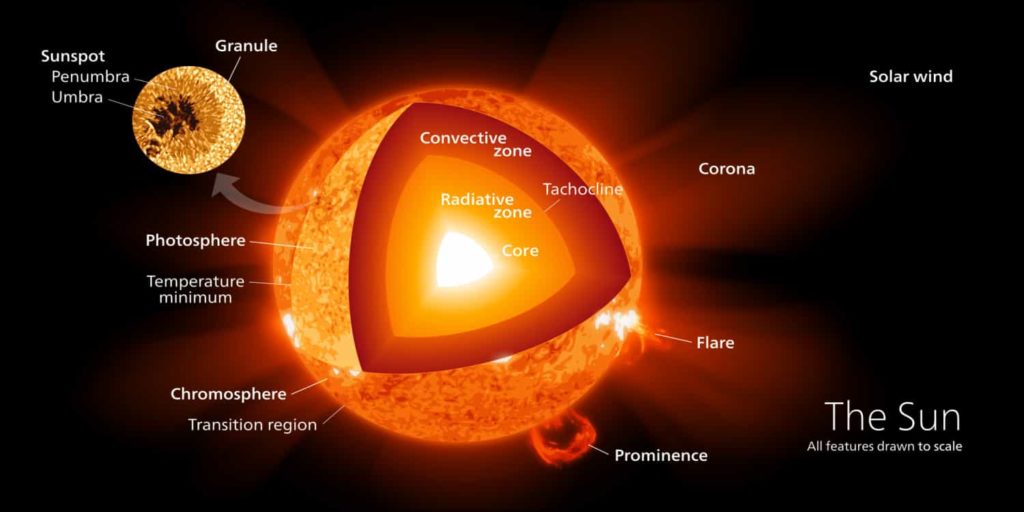 The different layers of the Sun. Credits: Kelvin Song

How hot is the photosphere?

The photosphere is one of the Sun’s main 3 layers, it is the ‘outer shell’ of our star and is what emits the light we see. This is also the layer that is most visible to the human eye! On this layer, the temperature sits at around 5,500°C (10,000°F) and is the layer that sends all the light and heat to Earth.

Whilst the Sun is indeed very hot, in terms of the rest of the temperatures the photosphere is the coolest part of the star itself, with its highest layers only reaching around 3,700°C (6,700°F).

How hot is the chromosphere?

The chromosphere is another one of the 3 main layers of the Sun’s atmosphere and it is just above the photosphere, but unlike the photosphere it can only seen by the naked eye during a solar eclipse. Its temperature peaks at its highest point, around 1,243 miles/2000 km above the top of the photosphere, at roughly 7,700°C (14,000°F), but its lower layers only reach a temperature of around 3,700°C (6,700°F).

However very little is understood about why the temperature of this layer gets hotter further from the Sun, but it’s suggested that it can perhaps be explained by magnetic reconnection.

How hot is the corona?

The corona is the Sun’s outermost layer and sits at around 500,000°C (900,000°F) but can be more at upwards of 1,000,000 degrees. This layer, like the chromosphere, cannot be seen by the human eye except for during a complete solar eclipse.

However, Astronomers are able to utilise a scientific instrument known as the coronagraph which allows them to view this layer at any given time – either via telescope or satellite where a coronagraph is present. This layer itself extends a few thousand miles above the visible surface of the Sun, and this is what then becomes solar wind that drifts across the solar system.

How do scientists measure the Sun’s temperature?

One common method is the use of colour! The science of what colour is emitted in relation to temperature helps us work out the temperature of the Sun and its various layers. By measuring the amount of light the Sun emits at each wavelength we can cross-reference that with existing graphs and models that have provided us with a ‘colour to temperature’ spectrum; such as the CIE 1931 color space.

But we have come to know that a shorter wavelength is linked to a higher temperature, and will show up as either a blue or deep purple. Usually, you would associate reds and yellows with higher temperatures, wouldn’t you? Rather fascinatingly the majority of the energy the Sun emits appears as either blue or green! However, there are various methods to assess the Sun’s temperature, and they have all led us to the same answers.

There was one mission that was launched in late 1995, that had the sole purpose of studying the Sun, known as the Solar & Heliospheric Observatory (SOHO). It was launched by NASA and the ESA with the aim of furthering our knowledge of our closest star. The mission itself focused on studying the Sun from the inside out, from all of its internal layers to the outer atmosphere. Originally it was only meant to be a 2-year mission, however, it is still ongoing and as of present, the mission has been extended to the end of 2025 where it will be subject to review.

It studies the Sun all day every day without any interruption and is made up of 12 scientific instruments that collect all the information required, including assessing the temperature of each of the Sun’s layers. 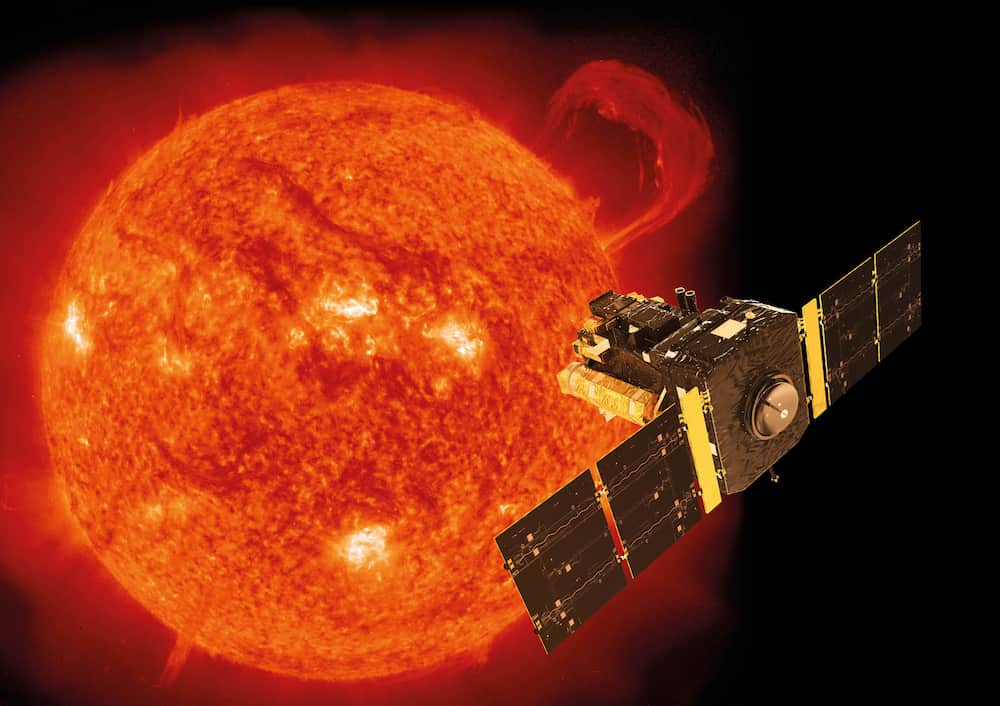 Solar & Heliospheric Observatory is equipped with many instrument capable of measuring the sun's temperature.

Will the sun get hotter in the future?

Slowly but surely the Sun is indeed getting hotter with the passing of time, granted this change is ever so incredibly slight so it won’t even be noticed for many many many millennia, but this does also mean that one day it will get too hot that Earth itself would become inhospitable.

But let’s dive a little bit deeper: Astronomers believe the Sun formed around 5 billion years ago, and we know the energy it produces is because of core thermonuclear fusion reactions. This means turning hydrogen into helium! This energy slowly moves outwards towards the photosphere and eventually out into space, and most importantly in the direction of Earth!

These reactions are ongoing, and with the amount of residual energy accumulated and being emitted, the Sun is slowly becoming hotter.

So now we know how hot the Sun is, and that answer is: very. Whilst we know that temperatures differ with different layers, we do know that it’s the core that is the hottest and the photosphere which is the coolest – even though its coolest is still ridiculously hot.

The methods we have for assessing and evaluating the Sun’s temperature will help us as time passes and the temperature slowly increases, granted we won’t notice much difference in a single lifetime, but it’s important that we have missions and projects in place to record what is happening so that we can not only predict its increase but also by how much.

Seeing as life on Earth relies on the Sun, and with it currently being in its most stable stage, we can acknowledge that at some point the temperature will increase beyond what any form of life can deal with, and most importantly: when the Sun will die. Scientists believe we are billions of years away from this happening, and naturally life on Earth would have become inhospitable a long time before the Sun even reaches that stage.

But who knows, would humanity have found a way to survive the slow temperature increase and get to witness the death of our nearest star and yet continue to survive? Well, we only have a few billions of years to wait until we find out! 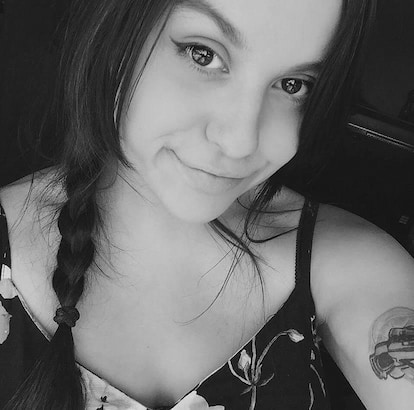 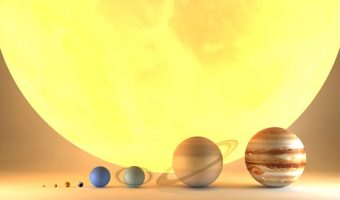 How big is the Sun?

The main actor in our solar system is the Sun since it contains 99% of all matter. Let’s talk about how big our Sun is. 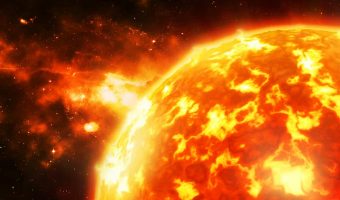 Meet the largest stars in the universe 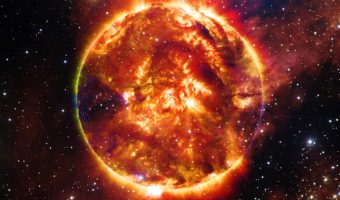