Every time you’ve gone on a short trip, you might be familiar with this situation: thinking about what kind of food to eat, where to eat it, how to cook it, the kind of resources that would be available, and how to dispose of the waste before returning home.

This basic, familiar process is not that different in space. However, astronauts have limited resources while in space and they need to make the best use of what they have. NASA has to come up with ingenious ways to prepare, stock and store the food that astronauts will consume while aboard the International Space Station (ISS). Like everyone down on Earth, astronauts need wholesome meals and snacks, so their meals include plenty of minerals and vitamins spread across 3000 food choices. 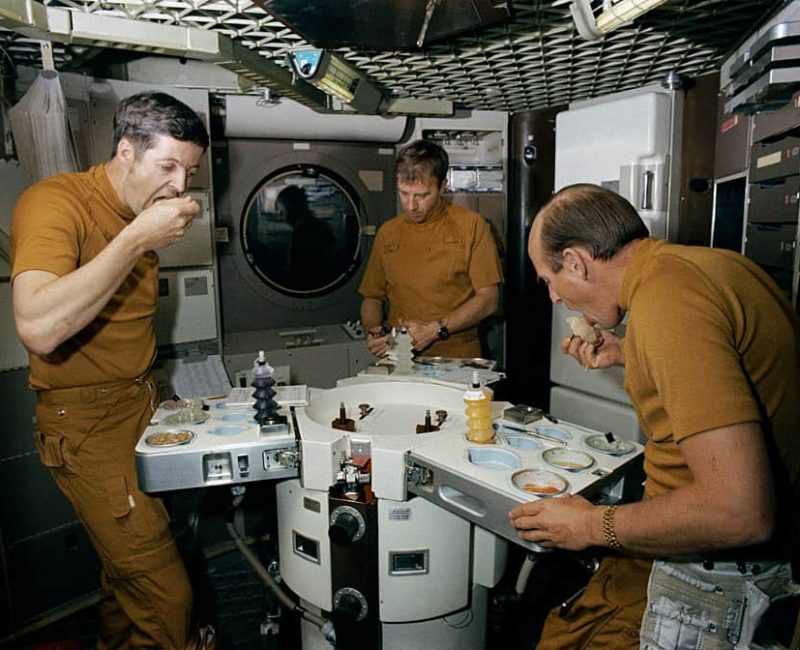 Three astronauts enjoying their space meal in a microgravity environment.

During the Apollo and Gemini missions, astronauts used to feed themselves by sucking out foods that were stored in tubes (similar to toothpaste tube). Since then, space food has come a long, long way. Today, some of these foods are dehydrated (this is similar to packaged dried noodles we find in stores). To make it edible, all astronauts need to do is add some water inside the package via a syringe.

Few other items are thermostabilized: they are heated to extremely high temperatures and stored in tightly closed containers (like canned soups). Yet other foods are eaten in their natural form (fruits and dried nuts). To store them for a long time, they are sealed in vacuum containers so that there is no air to rot them. 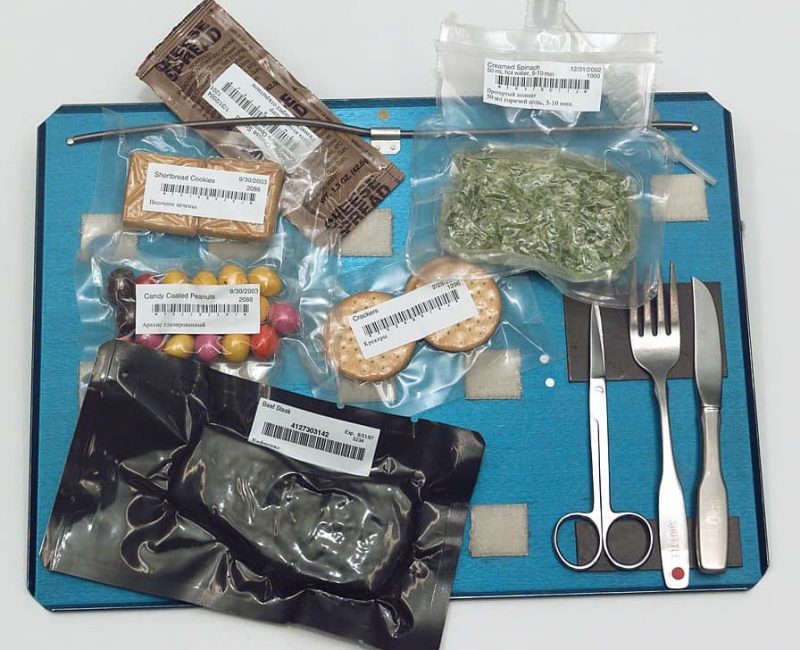 Example of an astronaut healthy meal. On the tray, there are several velcros and magnets to stop the food items from floating away. Source: Wikipedia

Despite the changes in how they eat or store their food, many astronauts have said that eating in space is a fun activity! Living in a microgravity environment for a long period of time psychically affects their bodies. To combat this and keep healthy, they eat three highly nutritious meals and a few snacks each day, as well as doing regular workouts.

A famous space snack developed by the European Space Agency is a muesli bar made with spirulina and goji berries. Spirulina is rich in protein, minerals, vitamins and antioxidants which makes it an important energy source for astronauts on a long mission aboard the ISS.

What do astronauts eat for breakfast?

Astronauts can choose from nine kinds of cereal for their breakfast. Options include Bran Chex, Oatmeal, and Rice Krispies among others. To accompany that they simply need to add a little bit of dried milk and water to the mixture for the meal to be edible.

Astronauts needn’t be deprived of coffee, either. Unlike on Earth, sugar and creamer are already added to the “space” coffee, so astronauts only need to add water and drink it (sugar in its powdered form is very dangerous onboard the ISS, it might enter air vents, astronauts’ eyes and noses, etc).

Being in a weightless environment for a long time affects astronauts bones and results in a loss of calcium over time. That’s why their breakfast are nutritionally balanced with calcium-rich foods (milk, yogurt, almonds, etc.) and vitamin D (fish, mushrooms, etc.). Other breakfast items include cinnamon rolls, French toast, pancakes, and apple cinnamon waffles. It all sounds pretty tasty, doesn’t it?

What do astronauts eat for lunch and supper?

For their main meals, astronauts can choose from six varieties of soups, including those made with beef, mushroom, and chicken. They can opt for fried or white rice, along with grape juice, fruit cocktails, peaches, and pineapples. As you can see, astronauts may opt for a multicourse meal that’s rich in a variety of nutrients.

Astronauts have recently started to grow their own vegetables, which could help them become more self-sufficient during future missions further out in space (notably the Artemis Lunar Mission). Their little space garden includes lettuce, radishes, mustard greens and pak choi. These vegetables are a great addition to astronauts’ lunch and supper for a few reasons: they are highly nutritious, they improve the flavor of their meals and they are fresh, just like the food on Earth, which is thought to have a positive impact on astronauts mental health.

Below is an excerpt from the International Space Station Standard Menu. As you can see, astronauts can choose what they want to eat from a wide variety of food. 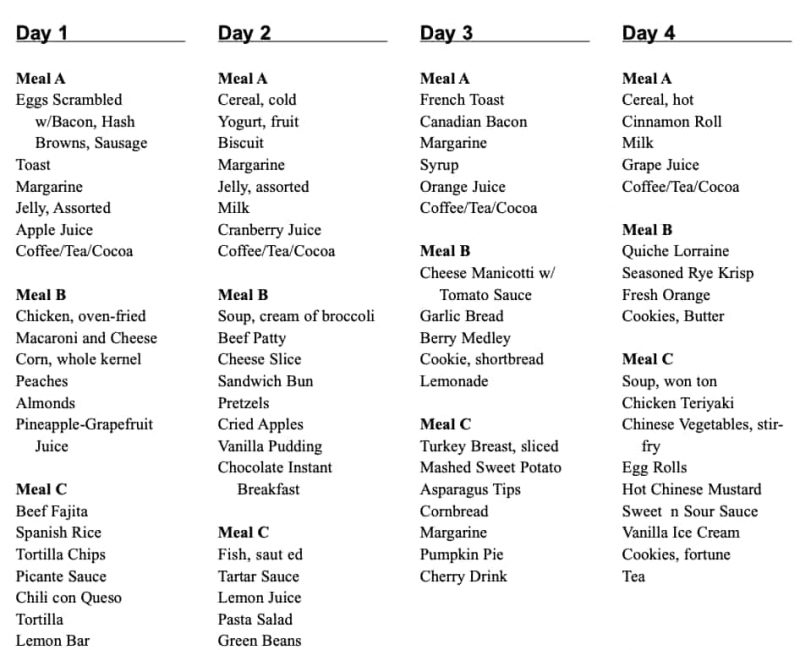 Why is astronauts food freeze-dried?

The Gemini and Apollo programs did not have a refrigerator, and astronauts needed to preserve their food for many months.

In order to greatly increase their shelf life, NASA quick-freezes the foods (quick-freeze is different from usual freezing; it limits the forming of ice crystals in the food, which in turn helps to preserve the taste and nutritional value) and package them up in a vacuum chamber. Doing so deprives the food of its moisture — ensuring that it remains edible for a long time. Freeze-dry foods can be compressed into compact packages that reduce the space required to store them on space shuttles and the ISS.

Space food is delicious. And you can't gain weight. pic.twitter.com/X5BDPAOvdW

How do astronauts eat their food in space?

Back then, astronauts sucked the food out of tubes (similar to how we squeeze paste out of a toothpaste tube). Now, their eating routines are closer to how we eat on Earth. Of course, astronauts still need to make sure no crumbs floats away when eating their meals.

Their solid foods are broken into pieces before eating so that astronauts can take full bites without leaving a trail of crumbs in their wake. Some foods need to be hydrated with either hot or cold water, so there are tiny tubes aboard the ISS that help astronauts do this. Once they finish eating, they put tiny tablets inside the now-empty food packages to prevent any microorganisms from breeding.

Astronauts seem to enjoy spicy food the most. In 2006, astronaut Thomas Reiter said “Our perception of taste is a little bit decreased. We have a longing for a little bit spicier food.” 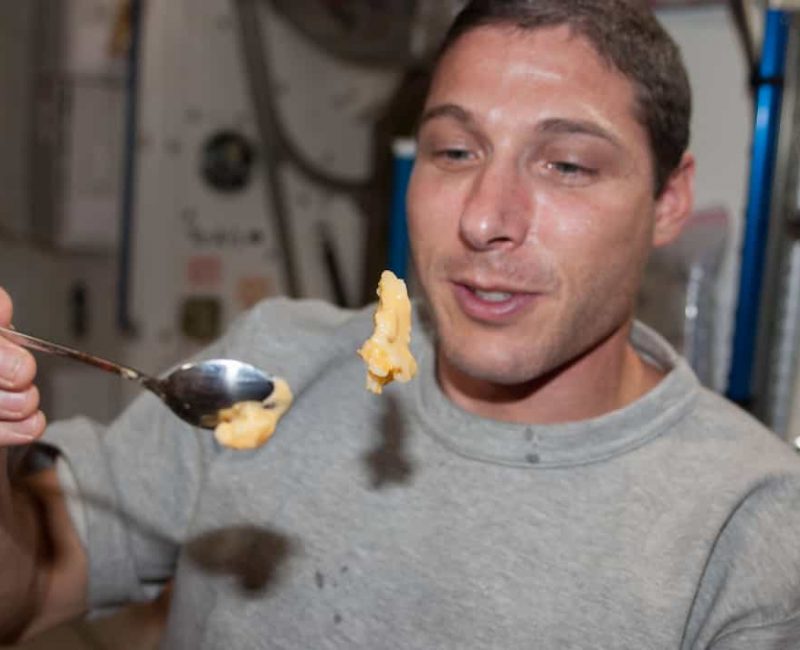 Astronaut Michael Hopkins attempting to eat a solid piece of food from a spoon.

Liquids such as coffee, water, and fruit juices are contained in sealed packages made of foil laminate (similar to a Capri Sun). This is because fluids might simply float away if they are squeezed out of the bag too forcefully. So astronauts drink through the straw attached to the container. There are several stations inside the ISS to refill their containers with fresh water. 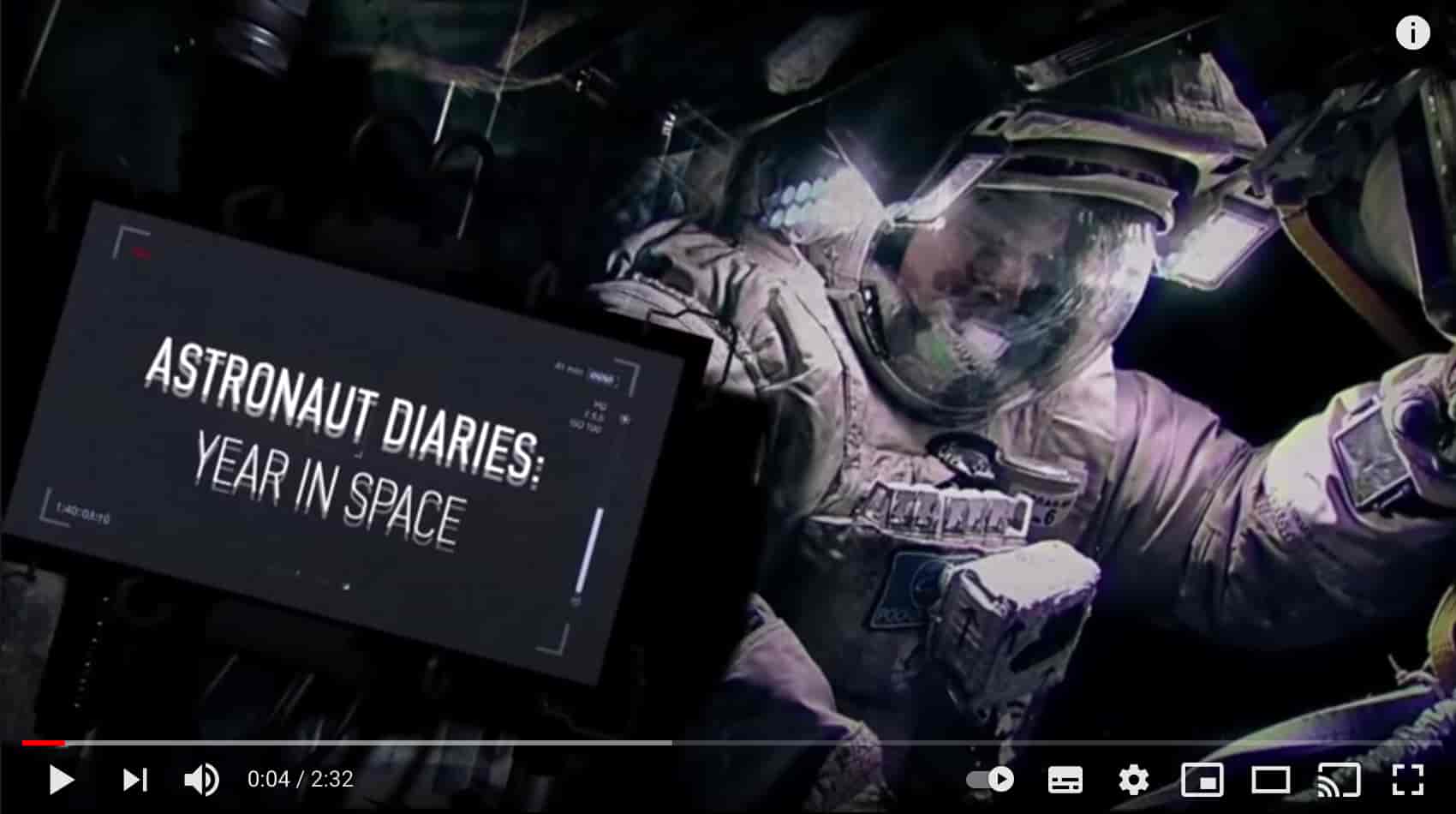 The foods astronauts aren't allowed to eat in space

Any type of bread has a crumbly texture — a dangerous undertaking for any mission taking place in a microgravity environment. No matter how small the bites the astronauts might take, pieces of bread might escape from the box and float away. Bread is strictly forbidden. The astronauts use tortillas as an alternative to bread.

To date, Buzz Aldrin remains the only astronaut who has consumed alcohol in space (he consumed it when he was in Eagle). NASA later forbid its astronauts from carrying and consuming alcohol during their missions. Alcohol impairs judgment and alertness, and astronauts need both to perform their duties to the best of their ability at all times and especially in the event of an emergency.

Unfortunately for our dear space explorers, they can not sprinkle salt and pepper onto their meals. Just like bread crumbs, it would be an impossible mission to ensure some would not float away and enter air vents, never to be seen again. Astronauts instead use salt and pepper as a liquid that they squeeze out of tubes.

Sounds like astronauts are missing a lot while in space, aren’t they? Added to the list of things they cannot consume are carbonated drinks. On Earth, the carbon dioxide bubbles separate from the soda and release toward the top of the soda can (called the soda pop). In space, this does not happen, which means the carbon dioxide bubbles stay within the soda because of microgravity. This is not good for astronauts’ health since it will cause a lot of discomforts, which is why they aren’t allowed in space.

You may have heard of the infamous Neapolitan astronaut icecream. Well… there is actually no evidence that astronauts actually ate ice cream while in space! While the ice cream was certainly designed and developed for the Apollo 7 mission, no one as ever confirmed that the three astronauts had it onboard their spacecraft during their spaceflight to the moon. Ice cream, when quick-frozen, is crumbly in nature and thus a dangerous delight to be consumed aboard the international space station. However, variations of this ice cream are sold in gift shops across the world, mostly in museums.

Fun fact #1: Expedition 53 crew had a pizza party where they put together a full pizza — in space

On a pizza night in 2017, Sergey Ryazanskiy, Randy Bresnik and Paolo Nespoli assembled a pizza in space, complete with sauces and toppings. You can watch the video here.

Although pizza and movie nights happen occasionally, astronauts do not prefer to take pre-cooked pizzas into space because the crust becomes soft and soggy — that’s definitely not how a pizza is meant to be enjoyed.

Yuri Gagarin, the first human to fly into space, had two servings of pureed meat and some chocolate sauce during his mission.

Astronauts can try the food beforehand, offer recommendations and select which ones they’d like to have onboard the ISS for their mission. Their “menus” are then reviewed by scientists in order to calculate the nutritional intake and some adjustments are made in order to ensure that the astronauts are having balanced meals. In space, astronauts can prepare their meals as quickly as 5 minutes.

Fascinating, isn’t it? Given a chance, would you try space food?

What kind of food do astronauts eat?

Astronauts can choose what they would like to eat during their mission from a menu that has a large selection of food items: cereals, chicken, soups, fish, fruits, eggs, cheese and even cakes!

How long does food last in space?

Space food is either freeze-dried or thermostabilized in order to achieve the required shelf-life which is between 6 to 18 months for space shuttles and the ISS.

Where do astronauts store their food?

Most of the food that is consumed onboard the ISS is stored at room temperature in locker trays. In 2020, 2 space-rated refrigerators were installed on the ISS, allowing astronauts to store fresh food from Earth.

Are there any differences between astronauts & cosmonauts?

Can astronauts see stars from space?

Who are the 12 men who walked on the Moon?