Breaking Boundaries: Which Spacecraft has Traveled The Furthest?

About 45 years ago, NASA initiated the Voyager space program mission when a favorable alignment of Jupiter and Saturn took place. Due to these planets’ strategic position at the time, scientists agreed to launch the now famous twin space probes Voyager 1 and 2 to analyze the gas giants and send back information to Earth.

No one could have guessed how far the two space probes would eventually go and what they would encounter. Both Voyager 1 and 2 might eventually outlive their creators through their decades of space travel, and undoubtedly, Voyager 1 will remain the farthest-travelling object ever created by man for a long time to come.

In 1977, NASA launched the two space probes Voyager 1 and 2, to explore the Solar System for a period of four years. After a successful mission to Jupiter and Saturn, the probes flew towards Neptune, Uranus, and then out of our Solar System.

The Voyager space program mission is among the most successful, especially considering that they have exceeded their goal for 41 years in a row and continue to do so. But why exactly is Voyager 1 farther away from us than Voyager 2? Voyager 1 - The Farthest Spacecraft That Still Travels to This Day

Even though Voyager 1 was launched one month later than Voyager 2, on 5 September, while the latter on 20 August, Voyager 1 has traveled more, and it is the farthest spacecraft in existence surpassing Pioneer 10.

However, different assignments for the spacecraft also come into factor when comparing the two.

The sun’s heliopause extends for about 100 AU, and one AU is the distance between the Earth and the sun, which is 150 million kilometers / 93 million miles. That being said, the probes achieved a remarkable and unintended feat of traveling over 100 AU away from us. How The Voyager Spacecrafts Traveled so Far

Even though the technology used by the Voyager spacecraft might seem vintage to us now, the distance they have traveled is no small feat, and it’s mostly thanks to how space works. In space, few things can rob an object of its kinetic energy; apart from this, there is no friction.

One of the things that can slow an object in motion in space is gravity and, in this situation, the sun’s gravity. One of the big advantages of the Voyager probes is that they are escaping the sun’s gravity with each passing day which means they will use less power until they don’t need to at all to drift in space. The gravity assists provided by our solar system’s planets helped speed up the probes and cut down on the sun’s gravity as well.

Both Voyager 1 and 2 will continue to drift in space until another star’s gravity gets a hold of them, yet this is unlikely due to their trajectory. Both probes are headed toward the theoretical Oort Cloud and will reach it in about 300 years. Space is huge, and it is unlikely that the space probes will hit anything, such as asteroids or comets. Even the thousands of asteroids in the asteroid belt are several miles away from one another, contrary to how they are depicted in movies.

Between 2025 to 2036, Voyager 1 won’t be able to power up any instrument though. Both probes will eventually be out of range of the Deep Space Network, and not even their weak radio messages will be heard anymore.

Even though the fate of the Voyager space probes might seem bleak and we will no longer receive any information from them in the near future, what both spacecraft have accomplished is of tremendous value.

It’s also unlikely that any other spacecraft will travel as far as Voyager 1 anytime soon. To honor the farthest spacecraft that has ever traveled from Earth, let’s take a look at Voyager 1‘s achievements: The Price of Adventure: A Look at the Costs of Traveling to Space

With new advancements in spaceflight technology, the costs of space travel are decreasing, making the dream of spaceflight a little closer for us all. 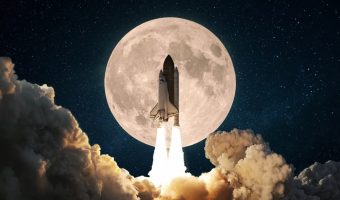 Voyages to the Moon: A Guide to Spacecraft Travel Times The Cost of Courage: A Look at Astronaut Pay