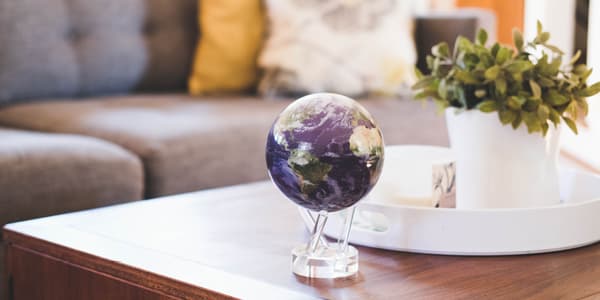 Mova Globes: What are they and how do they work?

Who doesn’t dream of being an astronaut? It’s a unique opportunity to contemplate the stars and study the universe. But what is most fascinating is the earth itself and how it rotates at a constant speed. Not all of us have the privilege to witness such a scene but thankfully, the Mova Globe is the next best thing! The Mova globe is a true mechanical marvel that captures the beauty of our beloved planet.

Disclaimer: If you choose to purchase a Mova Globe through one of the links on this page, we may receive a small commission at no extra cost to you. Thank you for supporting our website.

How the Mova Globes Work

At first, it’s tough to figure out how this globe moves so smoothly. No plugin or force is controlling this motion. However, when you purchase it and put it on display, you get awestruck.

So, the Mova globe has a base plate. In this base plate, you stick three plastic poles which hold the globe. When you build it at first, it looks pretty historic and solitary. Then you put the globe on them. The globe itself is like a rolling ball that is quite heavy. But the poles are strong enough. Once you set it up, the globe will revolve. So how does it happen? There’s quite a lot of technical aspects going behind it.

The outer shell of the globe or the map has nothing to with the motion. It’s just a standard plastic covering. But the inside of the globe does all the trick. First, it has a tiny motor that you can’t hear or notice.This motor runs on solar light technology. Therefore, the primary fuel behind the globe is sunlight. Second, it has a magnetic element that provides enough torque to keep it moving.

Setting up the Mova Globe in your home

What sets the Mova globe apart from other typical globes is the movement. It spins so effortlessly that you can’t help but stare at it for hours. It is quite soothing and mesmerising actually. The look of the Mova globe is pretty aesthetic as well. You can just put it on the side of your room, and it will be the center of attention. No matter how disorganized your room is, the globe will immediately improve your interior design. I have mine set up in my living room surrounded by fairy lights and it looks outstanding!! 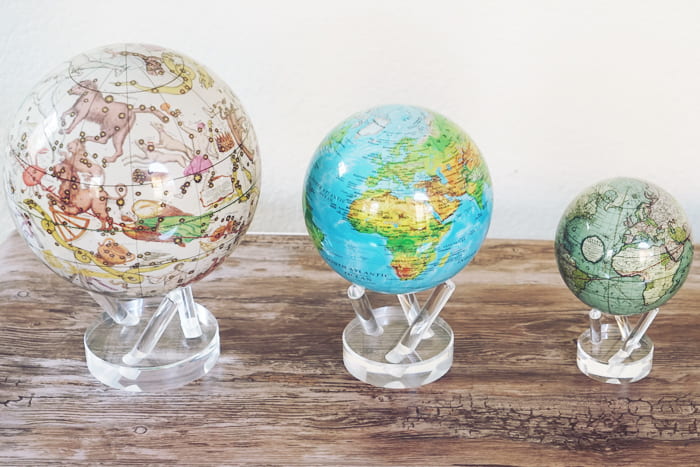 Now and then, we hear the news of how NASA scientists have new and exciting images of the earth. The natural look of the earth from space is something we die to see. With the Mova Globe satellite view, our wishes can come true.

The globe uses actual images from NASA. It gives us a picture-perfect representation of how our planet looks from their perspective. When the globe rotates, it creates stimulation in our brain. The exotic greenery and azure sky make an unforgettable visual experience.

This one is for those who love to sit under the quiet sky and look at the bright moon. You can only witness a full moon in eclipse. Who can wait for so long? We advise taking the moon to your home, not the actual moon but the Mova globe.

It has an attractive grey color that depicts the beauty of the moon perfectly. This globe also uses images from Nasa satellites. There’s nothing artificial about it.

If you are an astronomy freak, then you love the venus. It’s pretty close to the sun. You know what it means; it’s fiery! The red and orange colors terrify us, but also we have an urge to go near it. But going near it is not a very good idea as it’s way too hot.

But you can get the same experience with the Mova venus globe. It only measures about 4.5 inches. Therefore, you have a feeling of conquering venus when you look at it from your gigantic perspective. Moreover, it uses non-toxic fluids, so you have nothing to worry about, unlike the real venus.

The largest planet in the galaxy can be in the palm of your hand. Sounds unbelievable, doesn’t it? Well, with the Mova Jupiter glove, you can. This tiny Jupiter globe has incredible detail of the original planet. Jupiter is unique in every aspect.

The swirling storm and the little red spots covering the whole area make it distinct from the other planets. You can witness it all with the Jupiter globe.

In the next few years, scientists will be able to step foot on Mars for the first time. But before that, you can witness this reddish planet with the Mova Mars Globe.

The surface of Mars has a mixture of tan, brown and reddish colors. This amalgamation looks extraordinary in our eyes.

The infrared cameras have been able to capture the elegant beauty of Titan. The soft yet neon colours are serene, and the terrain has sand and icy lakes. This globe is one of a kind!

This one is for history lovers. The globe’s outer shell is the vintage map of 1790. We all have wondered how the earth looked back in the days, now we know. The globe accurately depicts each part of the antique map. You can see the oceans and nature.

It even has an ecliptic line that shows the position of the sun each day. When you stare at the globe, history will come to life.

When was the last time you lay down beneath the night sky and looked at the vastness of it? Unfortunately, with our monotonous life, we can hardly make time. But with the Mova glove, you can witness the bright night sky in your room.

The globe has 88 constellations. Each star and line is perfectly depicted, and you can see the milky way and shooting stars. You can even make a wish if you want to.

The white gold color adds a luxurious vibe to the globe. When the light falls on it, it glimmers. It’s simple yet elegant.

It even has longitude and latitude lines for the map enthusiasts out there.

When we look at the skies, we only get to see the clouds and bright sun. But there’s so much more to it. With the Mova Globe, we can finally witness how our planets look. It will give us a realization of how vast and mysterious the universe is.